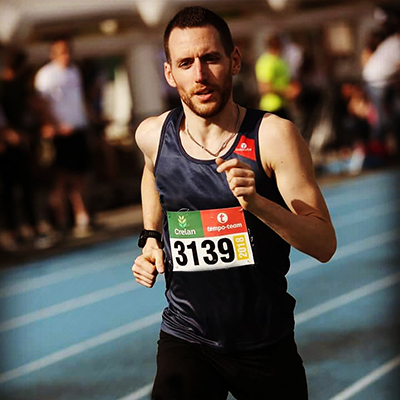 Geoffray spent his childhood in some 75 hectar forest of one of the oldest villages in Ciney, Chevetogne, where he hiked many times with his family. Without knowing it, running was always a way of life for him. For example, he always went to his football practice and back by running (4km), to save his bus fare. In 2003, he tried his first race at Bas-Oha. It was at that moment that his adventure in running truly began. He discovered a simple world of fair play and conviviality which suited him perfectly.

His passion for travelling and participating in different international races allowed him to discover places such as Paris and Sarajevo. Since 2014, he works as a running consultant trying to share his experience and knowledge with others. In 2018, he even accepted the challenge to try being a ‘coach’, as he gave advise to a few people.

Today he runs every daysfor at least 20 minutes. Because as Heile Gebreselassie says, “We can wash our bodies but how do we wash our spirits? By sweating! All you need is to lace up your shoes and put some running clothes on.”